Contest for Aspiring YA Authors

I have a little announcement from Book Wish Foundation for any of my readers who are hoping to one day be a writer!
Win a literary agent or acclaimed author's feedback on your unpublished manuscript for young adult or middle grade readers. This rare opportunity is being offered to the six winners of an essay contest recently announced by the literacy charity Book Wish Foundation. See http://bookwish.org/contest for full details.

You could win a manuscript critique from:

All that separates you from this prize is a 500-word essay about a short story in Book Wish Foundation's new anthology, What You Wish For. Essays are due Feb. 1, 2012 and winners will be announced around Mar. 1, 2012. If you win, you will have six months to submit the first 50 pages of your manuscript for critique (which means you can enter the contest even if you haven't finished, or started, your manuscript). You can even enter multiple times, with essays about more than one of the contest stories, for a chance to win up to six critiques.

If you dream of being a published author, this is an opportunity you should not miss. To enter, follow the instructions at http://bookwish.org/contest.

All These Things I've Done by Gabrielle Zevin 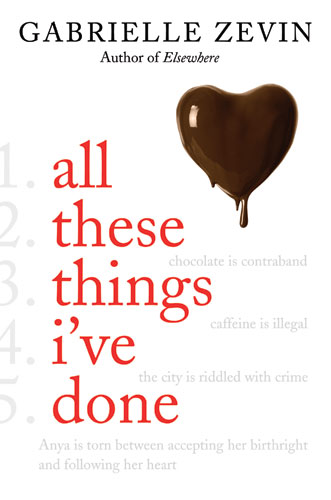 Title: All These Things I've Done
Author: Gabrielle Zevin
Age Group: Teens
# of Pages: 354
My Rating: 4/5
In 2083, chocolate and caffeine are illegal, paper is practically non-existent and many places we know of today are in ruins. Anya's father used to be a notorious crime boss (who is now deceased), so people judge her for her background. With her sick grandmother and her two siblings to take care of, it's hard to try to juggle life as is along with school work and relationship problems.
When Anya's ex-boyfriend, Gable, gets poisoned and nearly dies from the chocolate she gave him, the police thinks she is the culprit. Unable to get away from it all, the attention is now all on her.
Never have I read a novel where I found three characters, THREE, that I could totally see myself in. Usually the main character is the easiest to relate to (unless it's written in first person but different POVs). First, I want to start off with Anya's best friend, Scarlet. Scarlet is a hopeless romantic who has crushes on guys really easily. It was hilarious to read (for me personally) because it was the first time I have seen a character with this personality since I am exactly the same. But then you have Anya who is a complete realist. Anya and Win (the obvious boy interest) admit to liking each other but Anya understands that with her situation, she is unable to date Win because his father is the new assistant DA's son. Win likes Anya but is not the kind of guy to relentlessly pursue if she clearly is not interested. I have never had any favourite quotes from the books I've read before but here is one from Win:
"Yes, because if you don't like me, I'll stop bothering you," Win said. "I'm not the type of person to linger where I'm unwanted." - page 176
I very much saw myself in this quote because I know that even if I like a guy and I told him but he is not interested, I'll back off. I'll still be friends if he wants but I'm not going to do anything to further the relationship. It's refreshing to read that the male character won't go through that cliche plot of trying to chase down the girl.
Story-wise, I thought there was going to be a lot more action considering there is the mafia involved. Instead, it mainly focuses on Anya's everyday life, some of which gets really complicated but nothing with car chases or things blowing up (action movies much?). It is written with a steady pace and plenty of character development, just not a lot of bang as expected.
Overall, a nice read with tons of great characters. It's great for anyone who wants to read with a future setting but none of the dystopia or robotic futuristic feel. It's definitely something different (though I still can't understand the logic of banning caffeine and chocolate). I will close this review with another favourite quote from the book:
"...You can either be a bystander who lives his life in reaction to the decisions that others make, or you can be the leader who is making those decisions." - page 281
Review copy provided by Macmillan.

Email ThisBlogThis!Share to TwitterShare to FacebookShare to Pinterest
Labels: All These Things I've Done, Gabrielle Zevin

Title: Kamisama Kiss
Mangaka: Julietta Suzuki
Age Group: Teens
Series is: Ongoing with 8 volumes
Volume(s) Reviewing: 3-4
My Rating: 4.5/5
In volume 3, Nanami rescues a poor snake that is being harassed by her classmates. She doesn't realize that her goodwill leads her to being marked by the snake for betrothal! The snake turns out to be a shinshi named Mizuki who ends up kidnapping her and wanting her by his side forever!
The first half of this volume is a bit more serious compared to what has been happening so far. Mizuki plays a vital role in the series from this point on after being introduced. Why he kidnapped Nanami is quick to be revealed and that part of the story ends after three chapters. It switches back to a more fun note when Nanami gets sick and Tomoe takes her place at school by transforming himself into her. Meanwhile, Nanami who is at home sick is visited by Mizuki. He transports her soul back to the past to show her what Tomoe was really like.

In volume 4, Nanami goes to the beach with her friends and has Tomoe and Mizuki tagging along. Tomoe is unable to enter the water but when Nanami's friend, Ami, gets swept away by the ocean, he dives in to save her. Ryu-Oh Sukuna, the ruler of the sea, shows up immediately to take Tomoe away because of what he did years ago. In return for him, Nanami must find Ryu-Oh's missing eye. Will she be able to find it?
Nanami has developed strong feelings for Tomoe recently, which she confesses to him in the beginning of this volume. Volume 3 and 4 have been giving a lot of insight and depth on each character. With a bit of Tomoe's past revealed and the events that happened around it with Nanami, it foreshadows some things that will likely occur in the next volume or two. It is very sweet to see how much Nanami cares for Tomoe and will do anything in order to save him (though in honesty I feel that it is too much sometimes). I quite enjoy the last couple of chapters in volume 4 because Mizuki managed to permanently situate himself into Tomoe's and Nanami's lives. I am curious to see how it all turns out.
Review copies provided by Viz.