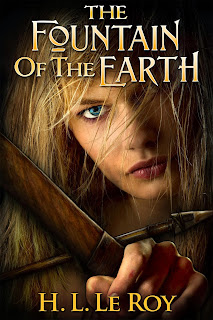 Terra Vonn is fighting to survive in a destroyed world,
surrounded by unspeakable horror . . .
and things are about to get much worse.

Title: The Fountain of the Earth
Author: H. L. LeRoy
Description: The first in a planned series, The Fountain of the Earth is set on the West Coast following a catastrophic solar flare that has destroyed civilization, leaving only a few people struggling to survive. After witnessing the vicious murder of her mother, Terra Vonn (15) has a singular focus—exacting revenge on the killers. But before she can complete her plans, savagery intervenes and she is cast alone into a brutal post-apocalyptic world. As she trails the men south through a land filled with cannibalistic criminals, slave traders, and lunatics, the hunter becomes the hunted. Terra quickly learns that she is neither as tough nor as brave as she thinks she is. Worse, she may be the only one who stands between what little remains of civilization and destruction.

Hello my lovely readers! I have temporarily crawled out of my hole to present to you a new author interview with H. L. LeRoy of the dystopian novel, The Fountain of the Earth! As you probably know, updating this blog with YA novel reviews likely won't happen for another while. Possibly after I graduate university (next year...). However, if you would like to see more of my reviews (not books unfortunately) and are in Toronto (or planning to visit soon), you can check me out at The Toronto Cafe Blog and on Facebook: www.facebook.com/TheTorontoCafeBlog. Oh and my Twitter @torontocafeblog. :)

Now, back to the interview. If you would like to learn more about H. L. LeRoy, The Fountain of the Earth or his other novels, you can visit at www.hlleroy.blogspot.com. 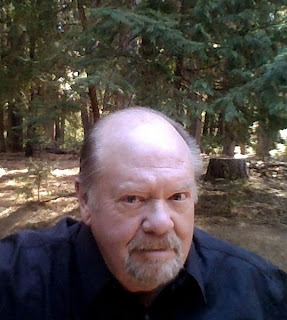 1. What inspired you to write The Fountain of the Earth?

I wrote a 250 word piece of flash fiction about a young girl alone in a post-apocalyptic world, entitled I Am Called Faith. Several who read it wanted to know more about the girl and the world. The Fountain of the Earth grew from there. The essence of I Am Called Faith can be found in chapter three.

2. What would you say is the easiest part of writing the novel? And the hardest part?

Creating the characters, and letting them run away with the story. The hardest was making sure that I never resorted to contrived solutions to problems. I wanted this novel to be plausible.

3. Describe The Fountain of the Earth in one sentence.

Fifteen-year-old Terra Vonn, cast alone into a brutal and savage post-apocalyptic world, is the only one who can save can save what remains of civilization from destruction.

4. Do you have any favourite authors and novels? If so, who and which novels?

Not in any particular order, Night Circus by Erin Morgenstern, The Art of Fielding by Chad Harbach, House of Leaves by Mark Danielewski, Fight Club by Chuck Palahniuk, Music for Torching by A.M. Homes, Hunger Games, Dystopia, The Mind Readers by Lori Brighton, Open Minds by Susan Kaye Quinn.

5. Finally, do you have any other novels in progress? If so, what are they going to be about?

I’m working on book two of the Fountain of the Earth series, tentatively titled The Heralds of Juno, as well as a mystery/thriller, Hollow Point, featuring Jillian Varela, a tough as nails female private eye.